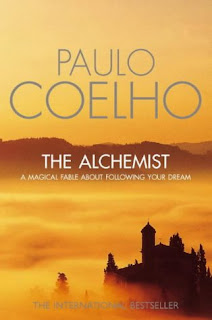 Number of pages : 167
Narrator
The author himself.
Characters
Santiago: a young shepherd from Andalusia.
The gypsy: an old woman who interprets the boy dream.
The old man: the king of Salem whose name is Melchizedek, he teaches the boy how to get to the Pyramids and in return, he takes the tenth of his sheep.
The thief: a man who speaks Spanish, he meets the boy in the bar and steals his money.
The crystal merchant: the boy meets him in Tangiers; he works for him and makes his shop expand.
The English man: he meets the boy in the caravan that heads to Egypt.
Fatima: the beloved of the boy.
The alchemist: an old man who helps the boy to get to the Pyramids.
The thieves of the Pyramids: they meet the boy near the Pyramids and rob him of his gold.
Secondary characters:
-         The merchant of wool.
-         The merchant’s daughter: the girl that the boy wants to marry in the beginning of story.
-         The baker: a man who chooses to become a baker and gives up his dream of travelling around the world.
-         The owner of the bar: he meets the boy when he arrives at Tangiers.
-         The leader of the caravan.
-         The camel driver.
-         The oasis chiefs.
-         The chief of the tribes: he meets the boy and the alchemist in their way to the Pyramids.
-         The monk: he permits to the alchemist to use his kitchen when they are near the Pyramids.
Summary
The novel tells the story of a young shepherd from Andalusia named Santiago. When he was child, Santiago was studying theology and his family wanted him to be a priest, but the boy’s dream was to travel around the world, to see castles and to meet new people, so he decides to be a shepherd despite his father’s refusal.
One day, the shepherd meets a daughter of a wool merchant and falls in love with her. One year later, in an old church in Spain, the boy decides to return to the girl’s city to ask for her hand.
When arriving to Tarifa, he decides to visit a gypsy to interpret a dream he saw twice. The gypsy tells him that his dream means that he will find a treasure in the Pyramids and that she wants the tenth of the treasure in return of this interpretation.
First, the boy doesn’t trust the gypsy, but then he meets an old man called Melchizedeck who knows everything about his life. The old man encourages him to search his Personal Legend and promises to help him get to the Pyramids for the tenth of his sheep. He also advices him to follow the omens God sends to him and gives him two stones Urim and Thummim to help him decide in difficult moments.
In order to achieve his dream, the boy sells his flock and travels to Tangiers. When robbed of his money, the boy decides to work for a crystal merchant to buy a new flock and return to his country.
After eleven months, the boy has to choose between staying with the merchant, going back to his country and achieving his dream of finding the treasure, he choose the last one because he believes this will give him the opportunity to conquer the world and to learn more things.
In the caravan that heads to Egypt, the boy meets an English man whose objective is to see an Alchemist and learn how to prepare the Elixir of Life.
After a long journey in the desert, the caravan should stop in an oasis because of the war. In the oasis, the boy falls in love with Fatima, a woman of the desert and he almost gives up his Personal Legend. Fortunately, he meets the Alchemist who promises to accompany him to the Pyramids.
Along their way, the Alchemist teaches the boy how to listen to the messages of his heart and decode them. When they meet the tribes, the only thing that saves the boy from death is to use the universal language to talk to the desert, the wind and the sun and to transform himself into the wind by reaching the Soul of the World and praying God the most powerful.
Finally, the boy arrives to the Pyramids but he doesn’t find the treasure, then, he meets two men who robbed him of his gold. One of the thieves tells the boy that he dreamt of a treasure in some old church in Spain but he wasn’t crazy to waste his time and search it. At this moment, the boy discovers where his treasure is.
Principal ideas
Novel style
The novel style is very simple and based especially on dialogue.
Points of agreement
Points of disagreement
Evaluation
The story is very interesting and contains a lot of suspense. It’s a success story that encourages people achieving their dreams by giving them some advice about life.
However, the novel contains many superstitous and incorrect ideas. So I rate the book 3/5.
Amal