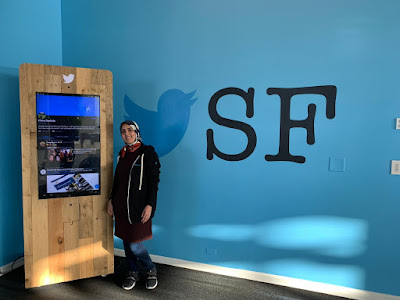 A photo with my Twitter account at Twitter SF
In 2019, I had the opportunity to have my Techwomen professional mentorship project at Twitter San Francisco HQ during the month of October. It was nothing less than a dream come true. Given how much Twitter influences social media and real-world lives, Twitter is today one of the biggest companies to work at. More than a year has passed since I was at Twitter and I still carry with me some of the most precious memories of my life.  Every time I read or see something about Twitter in the news, I feel filled with gratitude and nostalgia. This post is a humble attempt to capture some moments of fun and learning from this incredible experience.
#Lovewhoyouworkwith
A Tech Guru 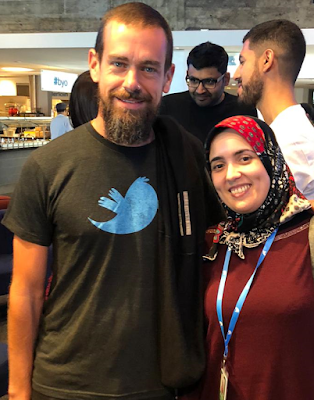 In order to prepare my professional mentorship at Twitter, I read about the current CEO’s biography, among other things, because I believe that leaders have a tremendous impact on company culture. As a teenager, Mr. Jack Dorsey created taxi-dispatching software. He dropped out of New York University in 1999 and moved to San Francisco where he set up his company to dispatch couriers, taxis, and emergency services from the web. In 2006, he approached Biz Stone and Evan Williams with the idea of creating an SMS-based social network. Together they developed a prototype of what would become the Twitter platform. On March 21, 2006, Jack Dorsey posted the world's first tweet: "just setting up my twttr."  The idea of a simple, text-based social media site, where the messages were short, turned out to be a success. Jack Dorsey co-founded Twitter Inc. in 2006, and returned as chief executive officer in September 2015.  He is also the cofounder and CEO of Square, a company that provides mobile payment solutions, financial and marketing services.

On a personal level, Mr. Jack Dorsey is famous for his unusual life of luxury, including a daily fasting routine, regular ice baths and his hard silent-meditation retreat. He is very thin, tattooed, with a long beard, nose ring and often dressed in black T-shirts, black pants and black sneakers. People at Twitter HQ talked about him with a lot of respect and admiration. When I met Mr. Jack Dorsey for the first time, he was very approachable and humble. With his noticeable tranquil character, he made me feel comfortable while introducing myself. I felt like I was speaking to a mystic guru. He welcomed me and he wished me good luck for my mentorship project.

A special meeting with the CEO 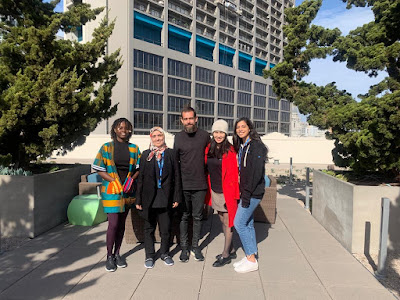 When I was reading about the CEO’s biography, I never thought that it was easy for me to meet him personally. During my stay at Twitter, I discovered that it wasn’t as difficult as I thought. Actually, I had the opportunity to see him in many occasions. One of those times was when the 2019 Techwomen participants were invited to interview Mr. Jack Dorsey for one hour in a special meeting.

It was an opportunity to sit down with him and ask him about his personal and professional life. For instance, how he could balance being the CEO of both Twitter and Square and what are the main good habits and personal qualities that help him to succeed in his mission as a Tech leader. In addition, we talked about some topical issues like security issues, personal data protection and privacy, Bitcoin and more. We also asked him about entrepreneurships and how we could turn our ideas into projects and succeed in it despite the big difference between ecosystems in Silicon Valley and those in our home countries.

Mr. Jack Dorsey was very welcoming. He encouraged us to ask him anything and he referred to the book we received during our first day at Twitter Flight School “The Art of Asking Essential Questions”. He asked us not to hesitate to suggest solutions or new ideas. While talking about good habits and life balancing, he insisted on the importance of having a good life routine as rising early, fasting, walking, planning, reading and meditation. He also talked about the role of a good communication and public speaking in both personal and professional life.

A great team of mentors 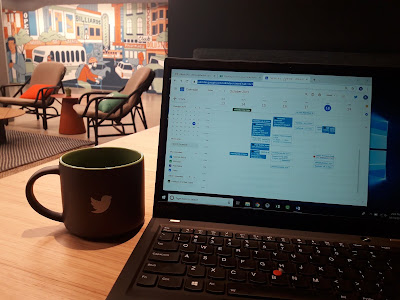 At Twitter HQ with my agenda and a cup of coffee

To be totally honest, heading into Twitter, I had no idea what to expect. A friend of mine gave me an advice about that: “You're in front of the ocean don't just wet your feet, dive in”. Basically, my mentorship project consists on exploring the technical and managerial ecosystem and meet up with engineers and managers in order to have an overview of the big picture and understand how Twitter works: Architecture, Software stack, leadership, work culture, etc. I was also interested with machine learning and analytics use and their impact on Twitter: ads, search, onboarding new users, dealing with spam/abuse, etc.

I had a short time to spend at Twitter, with a full agenda which means that I had to be flexible and focus on the most important. In this sense, I attended some interesting trainings that helped me to know more about Twitter. In addition, I attended some meetings with managers and engineers who gave me an idea about leadership and management. Furthermore, I visited the huge Twitter Datacenter in Sacramento. I had a big tour there with the guidance of the incredible datacenter team.  It was one of the most exciting experiences during my mentorship. 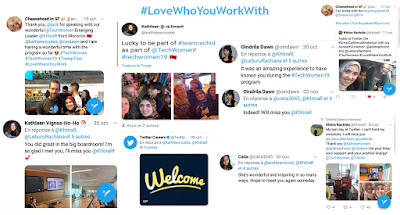 Some special moments with my mentors and friends at TwitterHQ

Actually, I hadn’t only a well thought-out plan; but also a great team of mentors. On my first day, I met the very supporting mentor Andrea Horst, a supply chain engineer. She has more than 16 years of supply chain management experience.  Actually, Andrea was the kind of person you like to have around you at work. She is a very enthusiastic and dynamic woman, always spreading good vibes in the room. Then, I met my mentor Kathleen Vignos a very charismatic woman. She is a Director in Platform Engineering at Twitter, where she heads Twitter's public cloud strategy and core infrastructure automation teams. Kathleen was a very caring and helpful mentor despite her tied agenda. Later, I met Oindrila Dawn, a Software Engineer at Twitter, where she develops tools for advertisers to be able to create campaigns on the Twitter platform. Oindrila is a smart young woman with whom I spent a great time in San Francisco and Washington DC.

I was lucky I had such smart and supporting mentors who made my experience rich and enjoyable. All of them helped me to get in touch with managers and engineers in order to see the big picture and have an overview of how the pieces come together to make it happen. On a personal level, I had some interests in common with each one of them like reading, blogging, cooking, hiking and volunteerism which in my opinion helped us to have a smooth communication.

My mentorship project was also very much about getting to know and connect with people. In this sense, I gathered frequently during lunch time or coffee time with my mentors and other Tweeps (people working at Twitter) in order to know each other. I had the chance to talk to the CEO, top managers, engineers and other employees. They were all source of joy and inspiration.

My mentorship project was very short but full of learning and fun. What helped me to stay focused and up to date is the way I managed it. Here are some tips to do it:

#Lovewhereyouwork
A historical workplace with a startup culture
The Workplace 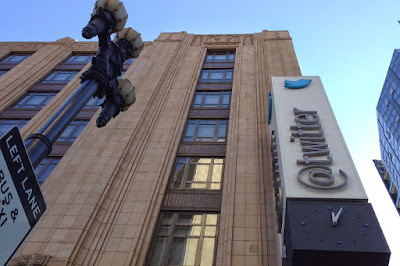 Located in the heart of San Francisco, Twitter’s global headquarters reside in an iconic Art Deco building originally built in 1937. It was the home of the historic Furniture Mart. This is the first workspace designed specifically for the company. The building seen from the outside looks more like a beautiful historical monument than a Tech company.

In this big comfortable environment, I noticed that no one seemed to be stick to his office all the day. Tweeps with their laptops move from place to place. Some of them prefer work from the headquarters’ rooftop deck. My favorite place at Twitter was the library. Whenever I needed to clear my mind and organize my notes, I moved there with the laptop and a cup of coffee. It’s a very quiet and a beautiful place. 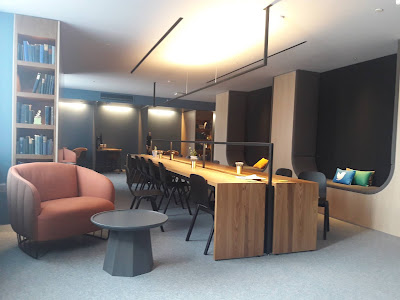 Actually, Silicon Valley work culture was always very inspiring for me: employees from different countries, diverse backgrounds and beliefs who show up to business meetings wearing T-shirts, jeans and sneakers. Big workplaces with all the perks you can imagine and in the same time companies with high level of turnovers in the world. At Twitter, I had the opportunity to have a closer look to this culture. 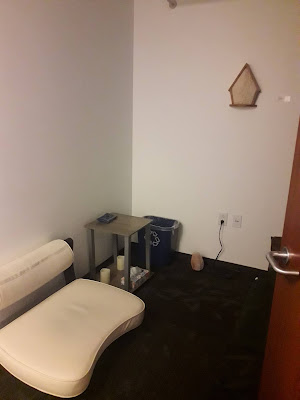 A room of prayer at TwitterHQ prepared
especially for Techwomen participants

I heard before that Twitter was famous for its diverse, inclusive and open culture. That’s so true! The workforce reflects the diversity of people around the world who are using their services. I had some interesting talks with some Tweeps about what they love in this workplace. The majority of them talked about the family orientated culture where you can meet friendly coworkers and in the same time smart people and great teamwork that can support you and help you to progress.  Some of them described it as a fun place because of his collaborative and open culture. There is also a general feeling shared by Tweeps of being involved in a world change process while serving public conversations. The company's mottos like "love where you work", “until we are all belong”, “love who you work with” seem to reflect the company culture that makes it operate like a startup. 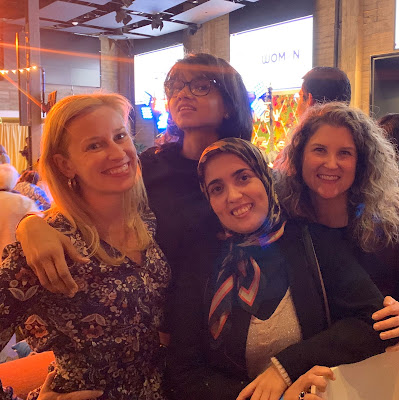 Every day at Twitter gave me something to be very excited about. Our agenda was full of meetings and also events and celebrations. The company frequently organizes events where Tweeps get together and chat about company achievements and interests which keep everyone connected. It was something very surprising the number of celebrations I attended at Twitter in a short period: Tweeps Got Talents, Twitter for good, Xlatinos, Diwali day, Techwomen celebration and much more. The platform connects people around the world and the company does the same with employees and their community.

The perfect mind in the healthy body 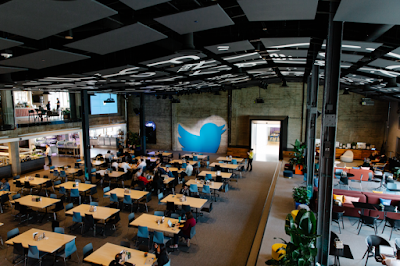 Twitter makes sure its employees are well fed. There is an enormous dining area known as the Commons that offers an impressive menu three times every day. It opens onto a roof garden that offers a beautiful view and an open space where Tweeps can gather and meet. In the menu, there is a variety of options: Gluten-free, Veggie and Halal options are also available. There is also a juice bar when you can prepare your personalized delicious fruit juice. In each office area, there is a cafeteria where you find coffee machines and fridges stocked with juices and sodas. Everybody can bring coffee, tea and snacks for free during all the day. In addition, Twitter provides yoga sessions to their employees. In Silicon Valley, many Tech companies bring mindfulness culture to the workplace not only as a tool to help their employees to handle daily stress. But also to improve clarity, listening and decision making skills.

It has been an overwhelmingly positive experience to be part of such a work culture. Here are some of my personal insights about it: 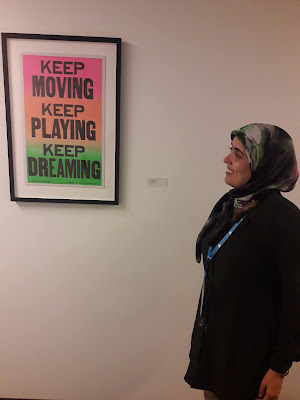 Me at Twitter: October 2019
The Rabbit is now flying. Where he is going this time? We should follow him to know.
Stay connected and be awake…

Twitter HQ in San Francisco
The Commons: The dining-area