Like everyone, I read books to seek new ideas, to conquer new worlds and to discover new horizons. For that same reason, and since I knew that the goal of TED is to spread NEW ideas and to share them with other people, I decided to attend the TEDxRabat that took place yesterday, November 24th. The theme of this second edition was “Illumination”, so the key issue of all speakers, each in his field, was to bring ideas that make people live happier, easier and better, despite of all the social, political and economic problems they meet nowadays. 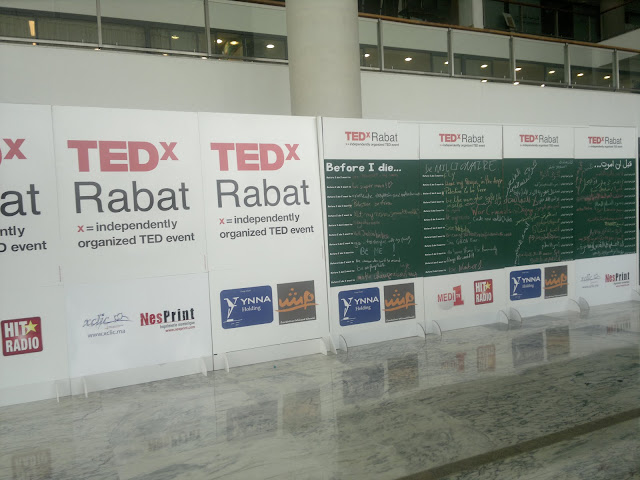 All talks could have been interesting if they had taken in consideration the ultimate goal of TED, which is, I repeat, spreading NEW ideas. Unfortunately, during every talk, I tried to pick up something new, but in vain. And I’m still wondering what’s new in friendship? in the power of energy? in the discovery of hidden waters? in the adoption of entrepreneurs? in the importance of Sufism in the stability of a country? and in the importance of living in the present and learning from the past?!!

Honestly, I think that the topics covered by this event were all old and archaic. I think also that those topics could have had a better impact if they had been used in lectures or debates, but not in TED talks. Moreover, in some talks, the quality of presentation wasn’t that high.

Maybe the cause of my disappointment is that I had already watched many of TED videos of other countries and I started comparing them to what I saw yesterday, and I can say that the gap between the two levels is very obvious.

But to be fair, the organization of the event was a good one, the timing was respected and the animation was a success. The choice of the videos shown between talks was also excellent, especially the second video about the “Before I die, I want to …” wall. I genuinely liked this video because I found the idea so simple but innovative and that’s why it became popular and loved by people worldwide. I liked also the motive behind this idea, which is, according to the speaker “Thinking about death clarifies your life”.


Anyway, I don’t regret being a part of this event, because I was able to have a personal opinion about it, and to see what’s good and what must be improved in the next editions.