Malcolm Gladwell has been a staff writer for The New Yorker since 1996, and is the author of five New York Times bestsellers - The Tipping Point, Blink, Outliers, What the Dog Saw, and David and Goliath. 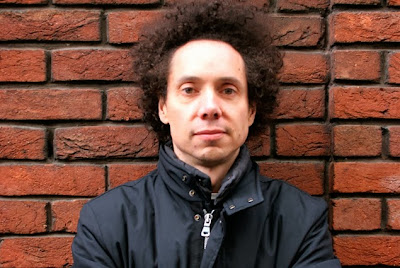 
Gladwell was born in Fareham, Hampshire, England. His mother is Joyce Gladwell, a Jamaican-born psychotherapist. His father, Graham Gladwell, is a mathematics professor from Kent, England. Gladwell has said that his mother is his role model as a writer. When he was six, his family moved to Elmira, Ontario, Canada.

Gladwell's father noted that Malcolm was an unusually single-minded and ambitious boy. When Malcolm was 11, his father, who was a professor of mathematics and engineering at the University of Waterloo, allowed him to wander around the offices at his university, which stoked the boy's interest in reading and libraries.

During his high school years, Gladwell was an outstanding middle-distance runner and won the 1,500 meter title at the 1978 Ontario High School 14-year-old championships in Kingston, Ontario.

In the spring of 1982, Gladwell interned with the National Journalism Center in Washington, D.C.

He graduated with a degree in history from the University of Toronto in 1984.

Gladwell's grades were not good enough for graduate school, so he decided to go into advertising. After being rejected by every advertising agency he applied to, he accepted a journalism position at The American Spectator and moved to Indiana.

He subsequently wrote for Insight on the News, a conservative magazine owned by the Rev. Sun Myung Moon's Unification Church.

In 1987, Gladwell began covering business and science for The Washington Post, where he worked until 1996.

Gladwell started at The New Yorker in 1996 and gained popularity with two articles, both written in 1996: "The Tipping Point" and "The Coolhunt". These two pieces would become the basis for Gladwell's first book, The Tipping Point, for which he received a $1 million advance.

Now Gladwell continues to write for The New Yorker and he also serves as a contributing editor for Grantland, a sports journalism website founded by ESPN's Bill Simmons.

Gladwell has written five books. When asked for the process behind his writing, he said: